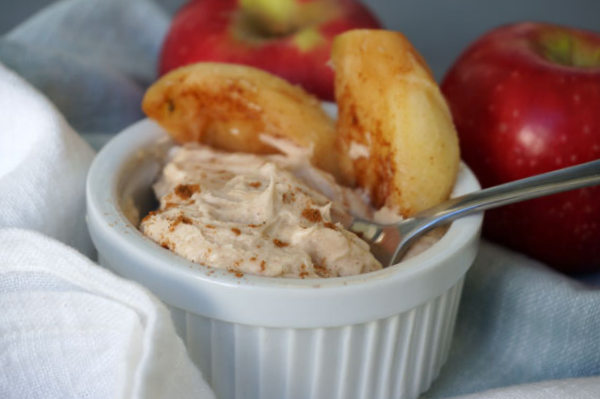 I have two giant containers of Spectrum palm shortening taking up too much room in my pantry, so forgive the indulgence of this recipe. We recently had the Restaurant Steaks and Sauteed Apples from one of my favorite Paleo cookbooks Real Life Paleo. I was unaware that steak and apples were delicious together, but now I must re-make this with my own twist in the near future. We had leftover sauteed apples the next day, and my hub was craving a dessert. These went SO well together, and then we had lots of leftover fluffy whipped butter for him to spread on his disgustingly bland rice cakes all week. How the hell does he eat something that tastes like a fragrance free dryer sheet is beyond me.

I found the flavor of the Cinnamon Honey Butter really developed nicely overnight, so if you’re planning on serving this at breakfast, make it the night before! Also let it sit out at room temperature so the fluffy texture is preserved, otherwise the palm shortening will harden at refrigerator temps. It will be particularly good with these delightful AIP recipes: Pumpkin Spice Bread, Banana Muffins, and Banana Cinnamon Tea Cake!

I came up with, in my opinion, a really good idea tonight. Doggy cereal boxes filled with grain-free kibble. I’m thinking a giant picture of Rafael with his sloppy/cute tongue hanging out on a brightly colored cardboard box labeled “Doodle-Oh’s” or “Crunchy Poodle Puffs” would sell like hotcakes. You may see me on Shark Tank next week with that one.