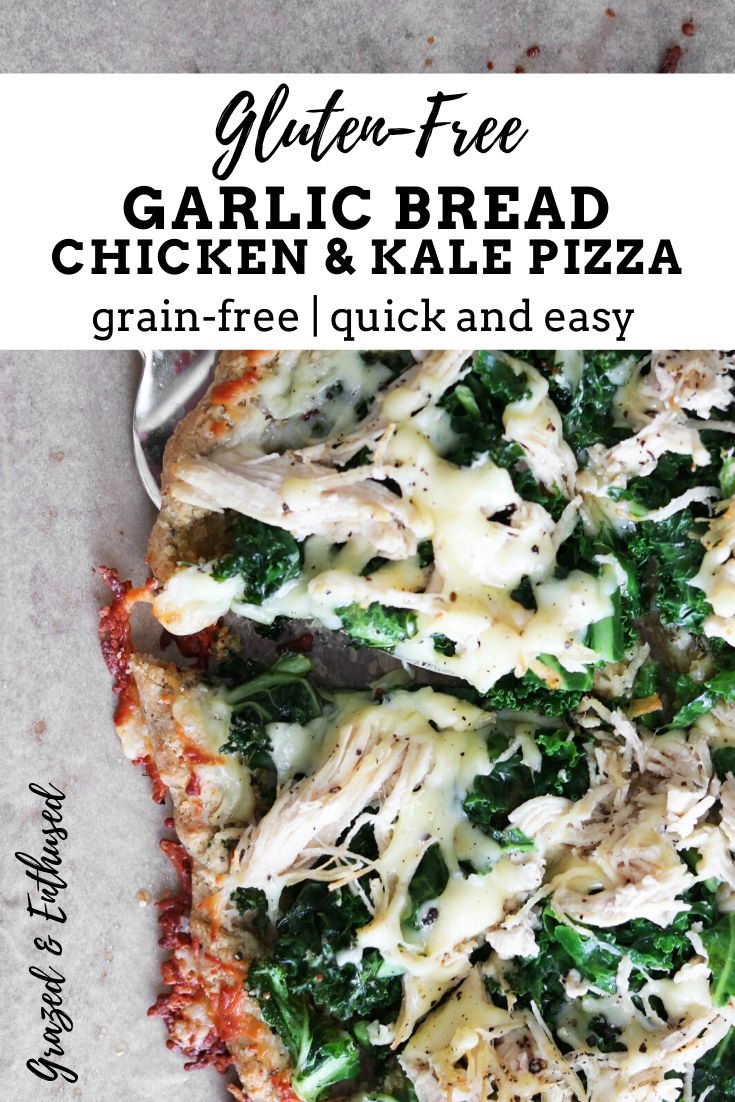 The best of both worlds collide here: Garlic Bread and Pizza made gluten-free and healthified with kale, shredded chicken and a delicious raw garlic spread. 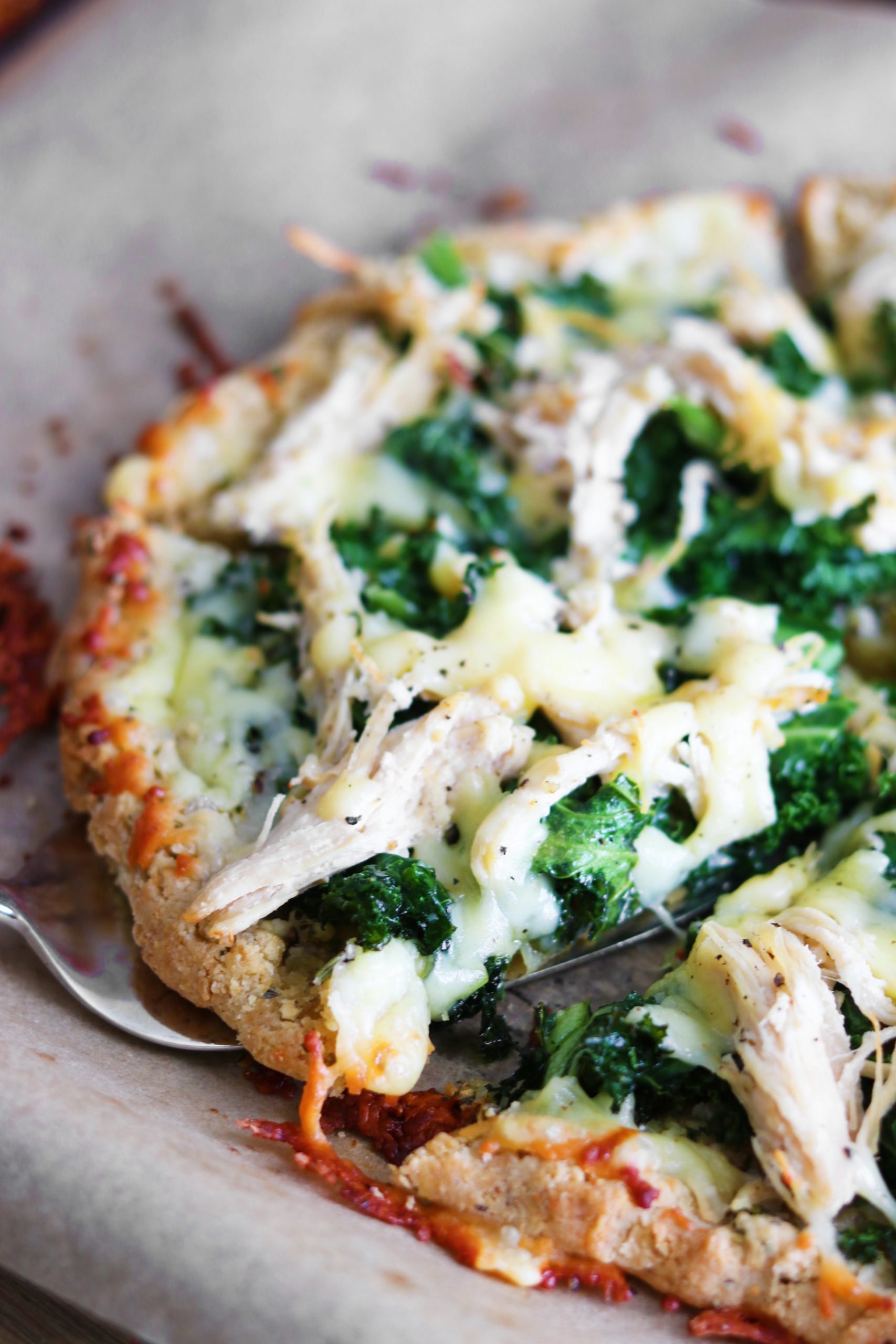 I first shared this delicious grain-free Garlic Bread Pizza recipe on Instagram a few weeks ago. It took me a hot minute to get it up on the blog because of obvious reasons (i.e. deep into the trenches of parenting from 6:30 am until 8:30 pm every day, day after day). This was during the point of staying at home where I was like, “Oh look at me being a successful and fun homemaker cooking my family a fresh, new recipe every night”. That quickly turned into “Who wants Breakfast for Dinner again?”

Thankfully my 4-year-old will never tire of Breakfast for Dinner. We’ve been doing the Paleo Birch Benders Pancake and Waffle Mix, maple baked Niman Ranch Applewood Smoked Bacon, and roasted potatoes or fresh fruit or a smoothie. Honestly, these last two months have both gone by in a blue while also at record slow speeds. I can’t tell which.

If you’ve never experienced Groundhog’s Day before, now you have. Well, thankfully weeks ago this broke up the monotony (it took me far too many attempts to spell that correctly) with this grain-free Garlic Bread crusted Chicken and Kale Pizza made with Simple Mill’s boxed grain-free Pizza Dough.

I’m a big fan of their products for when I need convenience – although they are not organic – I’m sure that would be cost prohibitive and at least double the cost of their mixes. I’ll be using their Vanilla Cake box this weekend to make my daughter’s birthday cupcakes with a homemade Strawberry Buttercream Frosting.

The ingredients for this DIY Pizza Night recipe are simple: 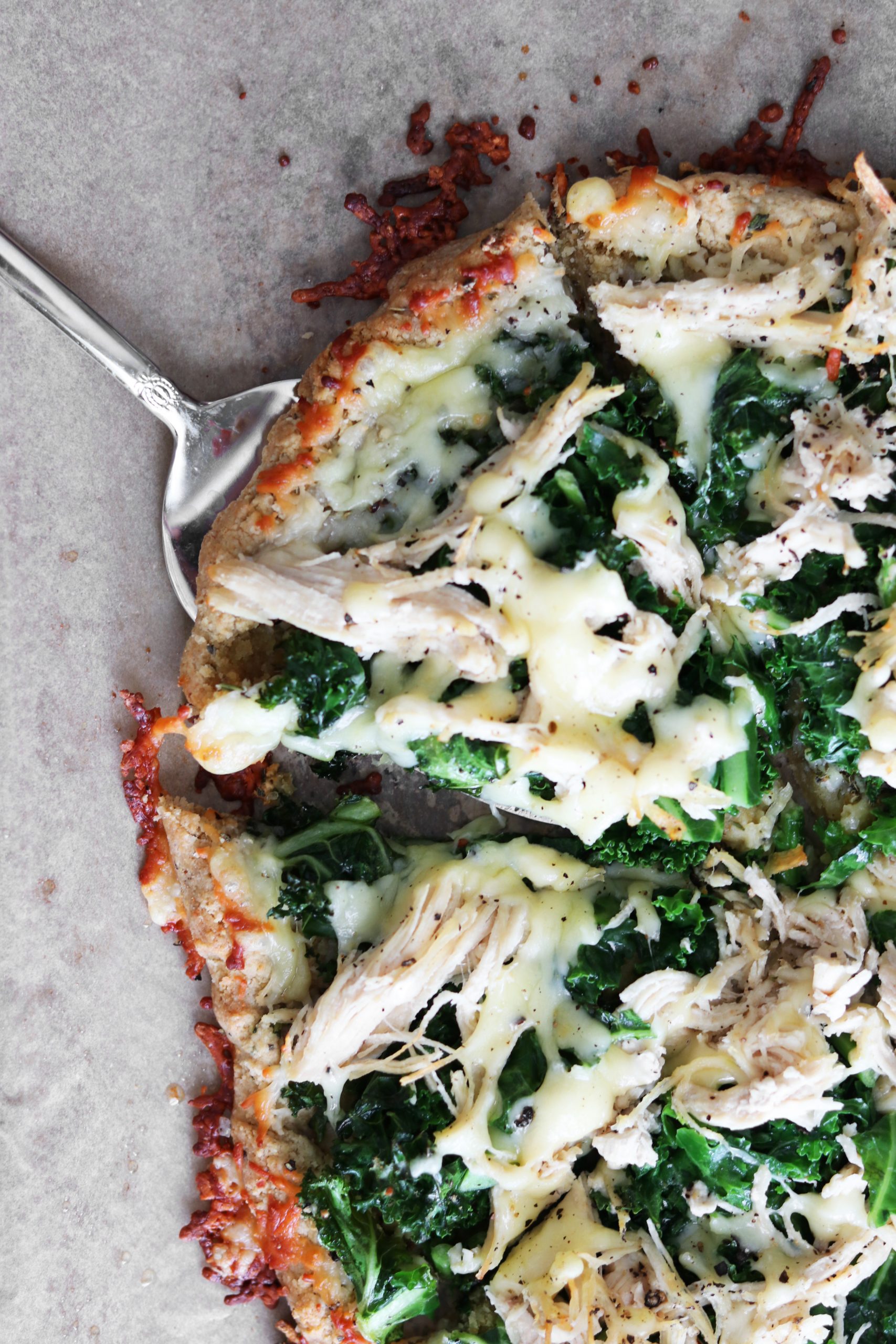 How to make the Simple Mills Pizza Dough:

2. Roll out between two sheets of parchment paper to prevent sticking. I find it easiest to roll out directly on my baking sheet or aerated pizza pan.

3. I find this crust to dry out pretty easily so don’t skimp on the vinegar, oil or water and be sure not to overbake.

4. Prebake the crust according to my instructions below. Top with toppings and then return to oven to finish baking.

If you’re looking for a nut-free pizza crust, you can try my AIP Thin Crust Pizza made with arrowroot starch, coconut flour, extra virgin olive oil and warm water. 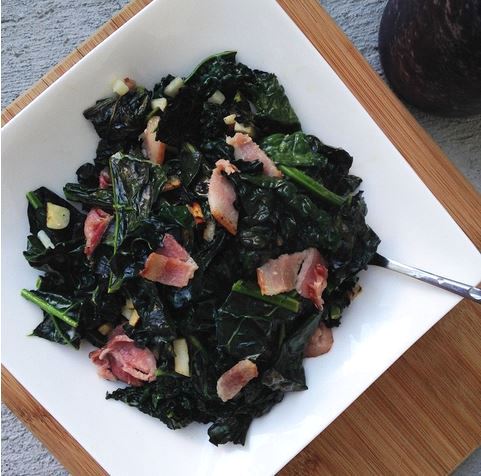 I know I joke about being an 85 year old stuck in a 26 year old body,  but I think I’ve taken it too far. We are home on a Friday night surrounded in pillows watching Dateline reruns with ice water. Party.

You know what’s more fun than watching TV on Friday night!? Breakfast. I’ve been eating this quick and simple sautee regularly for breakfast since throwing it together a couple months ago on a cold winter morning. I have another recipe that I want to post before the end of the weekend for Skillet Apple Crumble. It is sweetener-free and SO delicious and uses Anti-Grain Apple Flour. So get on that if you don’t already own it because you won’t want to miss out on this recipe!

1. Cook chopped bacon in a skillet until crispy. Set aside the bacon but leave bacon fat in the skillet.

2. Cook kale in the bacon fat until wilted. Stir in the coconut milk, minced garlic, and truffle salt. Reduce heat to low and simmer until the coconut milk has thickened and the garlic flavor has mellowed, 1-2 minutes.

3. Serve warm as either a side dish or a light meal.