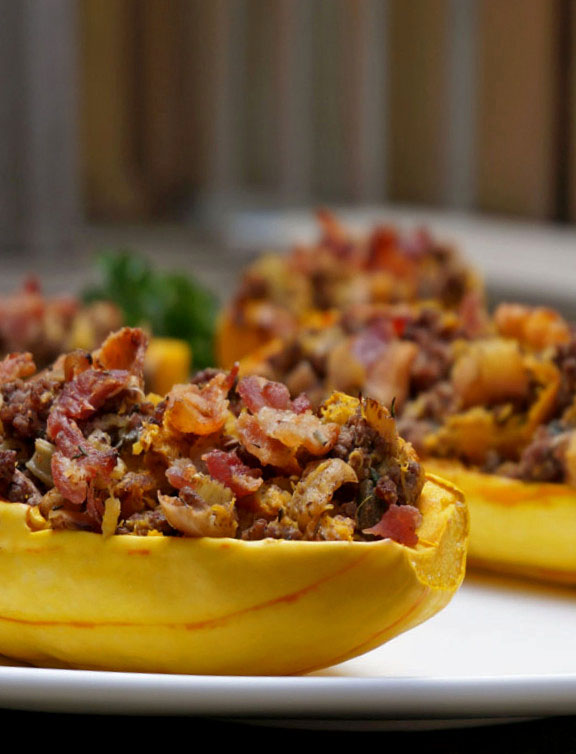 I created this recipe 2 holiday seasons ago and included it in a limited edition AIP cookbook that is no longer for sale… which means now I get to share it with you guys for free! It features 3 of the best things in the world: Thanksgiving stuffing, delicata squash, and stuffing stuffed inside of delicata squash.
It’s the shiz & makes a ton. You can cut the recipe in half if you just want to serve 5 people instead of 10. It would make for either a very hearty side dish or a lighter main course with a salad on the side. May I suggest the Toasted Coconut  & Fig Kale Salad from The Healing Kitchen?
I started packing up our place today. So many memories in just a little over a year here. If you’ve been following me for some time, you know that I moved to Chicago –> Atlanta –> Florida –> Chicago –> Austin –> now back to Florida in the last 3 years. I was hoping a move to California or another large American city would have taken place before we settle back in Florida. Alas, we realize we need extra help with Grace. This Mama needs more than 45 minutes a day to herself so she can go back to work!
I decided to stay at home for the first 6 months first and foremost to establish the strongest bond and breastfeeding relationships possible with Grace. Second because childcare costs are ridiculous. I’m going to rant for a quick sec and say anyone who says admonishing or negative comments about stay at home moms have CLEARLY never been a stay at home mom. I actually hear the most negative comments coming from other moms which breaks my heart! I’m so thankful I am fortunate enough to be able to stay at home and have support from my blog readers to make that possible. I realize that many working moms do not have this choice, and I can’t imagine how hard it is to leave your baby home each day. Which is to say, always do what’s best for you and your family and not what you think pleases others.

These Thanksgiving Stuffed Delicata Squash have all the savory holiday flavors you love without any of the dairy or bread!