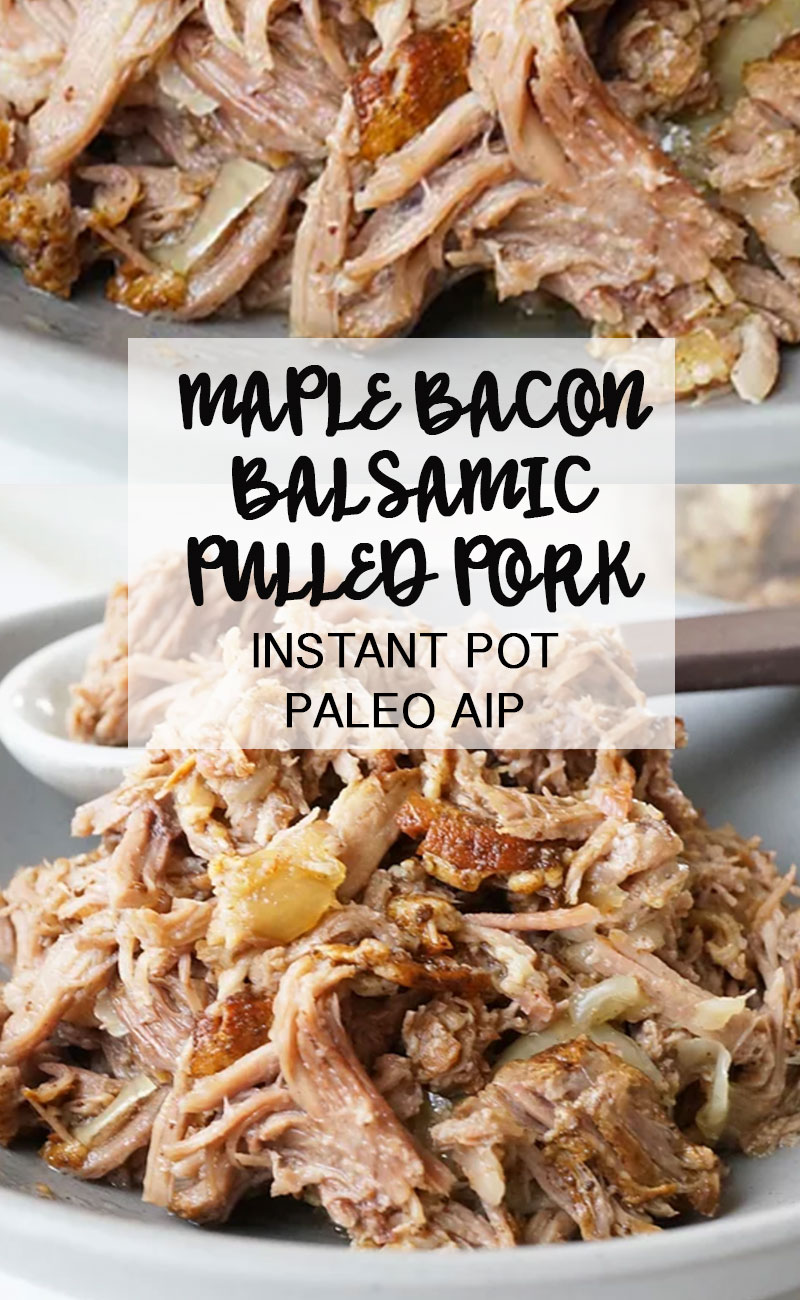 I made a big, well big to me, announcement on social media yesterday! If you’ve been following G&E from its inception in 2014, you’ll have noticed I have written a few articles on fertility (or infertility as was my case) with autoimmune disease. I struggled with this issue for my entire 20’s (I’ll be 28 this year), and it was really that last piece of the puzzle that I felt like I had been chasing for years. I thought I would continue to chase it for many more years until I was so tired, I gave up. Or I went through menopause. Whichever came first. Fact is I’ve been wanting to start a family since we got married 18 months ago, and I was determined to do everything in my power to make that happen as naturally as possible. Thankfully, the race ended in 2015 with me crossing the finish line instead of ducking out at a water station and going home. I had a horrible, horrible, horrible (can I say it five more times or is that annoying?) Hashimoto’s flare that lasted from the end of 2014 through summer 2015. It nearly killed my soul. On the other side of that flare waiting for me though was a little baby girl. So all that suffering had a purpose after all. Keep reading, if you’re like, this is the worst baby announcement ever. It gets better.

For the first time in my life, I was actually overweight (according to doctors) in 2015. It wasn’t necessarily my diet or exercise by any means. I gained 20 pounds in less than 2 months without changes to either and then an additional 15 over the next 4 months. The incredible control the thyroid has over our bodies is really mind-boggling. And can be very depressing at times, especially those times when you cannot control the control board of your very own body. I struggled with poor body image all of 2015. My clothes didn’t fit (far from it in fact), I couldn’t believe the number I was seeing on the scale, and I hated looking at myself in photos. I’ll be honest – I still don’t love seeing new pictures of me. I’m vain, what can I say. Don’t tell me you’re not! But I have come extremely far in the past year in terms of my acceptance of my new body. I look like this for now, and I don’t know if it will ever change. I’ve had some not-so-nice comments said to me, and I’m sure more than one person thinks I’ve been bingeing at home the entire year, which is far from the case. Anyone with Hashimoto’s-induced weight struggles will tell you, it doesn’t matter if you’re living on carrots and lettuce. You still gain and gain and gain and gain. And then gain some more. It turns out that even know I don’t particularly like the looks of my newly cushy body, my fertility does.

So basically 2015, overall, sucked despite the amazing opportunity to author a cookbook. I was depressed almost the whole year and had very poor self esteem. When you go from happy with yourself, vibrant, social, and fit to the absolute opposite spectrum in every way possible, your world is rocked. I’m not ashamed to say those things about myself. It’s just the honest truth, and I know I’m not alone in those feelings in the autoimmune community.

In September, after I graduated from my master’s program, moved from Chicago (our 4th move of the year!), and was in between our move to Austin, I booked my husband and I a last minute trip to Hawaii. I just wanted to be somewhere peaceful, beautiful, and as far as &%&* away from everything without needing to bring my passport. I had apprehensions about the trip a few days before. Just odd feelings and very anxious. I don’t know why. Probably because I’m a bit scared to fly over the ocean and also because there were some nearby hurricanes and resultant tsunamis near the islands. It was also supposed to rain the entire time we were there, so I was a bit bummed.

Two nights before we were to leave, we were visiting my husband’s family in Omaha and at a friend’s house. The friend has a close relationship with a woman she told me had some, shall we say, spiritual powers. Of course my interest was piqued, as I’m very open minded to that sort of thing. I wanted to know if the friend had any inklings about what was to come in my life. I didn’t feel like I had a big purpose for the first time in years. I was moving to Austin without a job and away from friends or family. I was overall disengaged from my previous interests and inspirations. I didn’t have that one big goal to work towards like I had throughout my adolescence and early adulthood.

The friend told me she saw a baby in my future in the next year and a whole host of other accurate and interesting things about my health, career, and relationships. What she said about my past was true, and she knew some intimate details about deceased family members whom I cherish. She had calmed my fears about my trip to Hawaii and said she saw it as a second honeymoon. Our first honeymoon was pretty terrible for me as it was at the beginning of that 2014 flare, and I was a miserable mess the whole time. I let go of my fear for the trip and off we went, hoping for the best!

A couple days later she texted me to tell me the baby was coming sooner than she thought. In fact, she said, I was already pregnant and just didn’t know it yet! She said it could be someone close to me in my life as well, it was hard for her to tell, but I had a gut feeling it was in fact me. I was only 3 1/2 weeks pregnant at the time, so I couldn’t test just yet.

In Hawaii, right at the 28 day mark of my menstrual cycle, I took a pregnancy test and when the two double lines showed up, I broke into tears. I was by myself because my husband had went to the bathroom to change into his trunks to go surfing. I wanted to take the test by myself because it was me and only me who overcame what I had this past year. Everything I had gone through in 2014 and 2015 DID have a bigger purpose. And I finally had mine. I wrote in the sand before his return to the beach “I’m pregnant!” We took a picture, giggled, went into slight shock, then he went surfing for a couple hours while I laid in the sand pondering this new little cell development. I can’t believe that was already 4 months ago!

I’m halfway through my pregnancy this week (20 weeks!), and I will be sharing my journey in a separate post soon, as I know there’s many young women who follow me here with similar goals and struggles.

Welcome to the family, Grace Julia! We will see you 6-1-16 (hopefully just a bit earlier than that, please?!) and cannot wait to smother you in kisses!

Oh yes, and here is a VERY delicious pulled pork recipe for your Instant Pot!

Only own a slow cooker? Just cook your pork on low heat until tender and shreddable for anywhere between 7 to 9 hours or overnight! 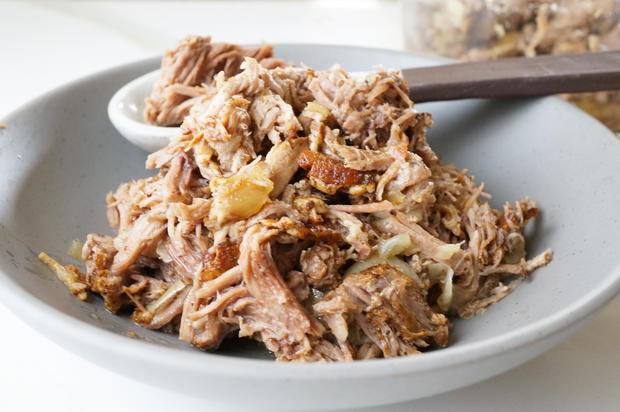 This recipe is so popular you can even find it in The Paleo AIP Instant Pot cookbook along with 140 additional recipes! 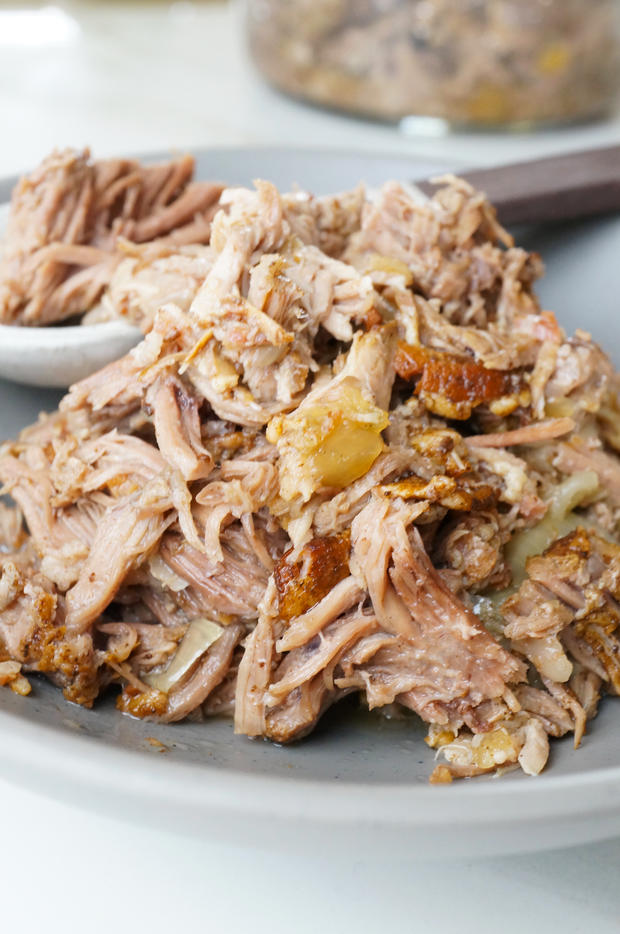